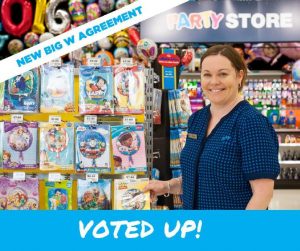 “We’re very pleased Big W workers have delivered an overwhelming 92% yes vote on a new agreement which will deliver pay rises for all workers, improve penalty rates, lock in hard won SDA conditions for Big W workers into the future and provide a comprehensive range of improved conditions, including a redundancy scale superior to the National Employment Standards.”

“There is no doubt that this excellent ballot result is the outcome of many months of hard work and consultation by SDA organisers and delegates with Big W employees.”

“We’ve worked very closely with Big W members to craft an agreement that delivered on the things they said were important to them.”

“They told us they wanted to lock in pay rises for all employees, access to improved penalty rates and they wanted to retain all of the SDA conditions they have had fought hard for and won in the past.”

“Causal employees will now have the option of applying to become part time if they consistently work the required hours over a 12-month period.”

“The union movement has been at the forefront of addressing this vital issue and we’re pleased that we’ve been able to secure domestic violence leave in another EBA.”

“The overwhelming yes vote indicates that we’ve been able to deliver an agreement in line with the wishes of the people that matter most, Big W workers.”

“Additionally, we’re really pleased that, as part of the agreement, we’ve been able to ensure that the first pay rise will apply from 6 May 2019 regardless of whether the agreement has been approved by the FWC by then.”

This incredible ballot result is a testament to the hard work of SDA workplace Delegates and demonstrates strong engagement from members in the stores.”