Through the COVID-9 global pandemic and the concomitant social and economic restrictions, spikes in atypical consumer behaviours, with devastating effects on retail workers, were observed across the state.

From the hoarding of toilet paper to the weaponisation of the COVID-19 virus through deliberate coughing or spitting, retail and fast food workers truly were at the frontlines. Following considerable anecdotal reports from Union members the Shop, Distributive, and Allied Employees’ Association of Western Australia(SDA) surveyed its members and confirmed this issue of deliberate spitting and coughing towards retail and fast food workers was as bad as initially feared.

More than 75 per cent of respondents said customer violence and abuse had increased since the COVID-19 pandemic had been declared.

More than three out of every four respondents have personally experienced verbal abuse, and more than one in five said they had been either subjected to violent customer behaviour including spitting and deliberately being coughed on during the same period.

The full report can be found here. 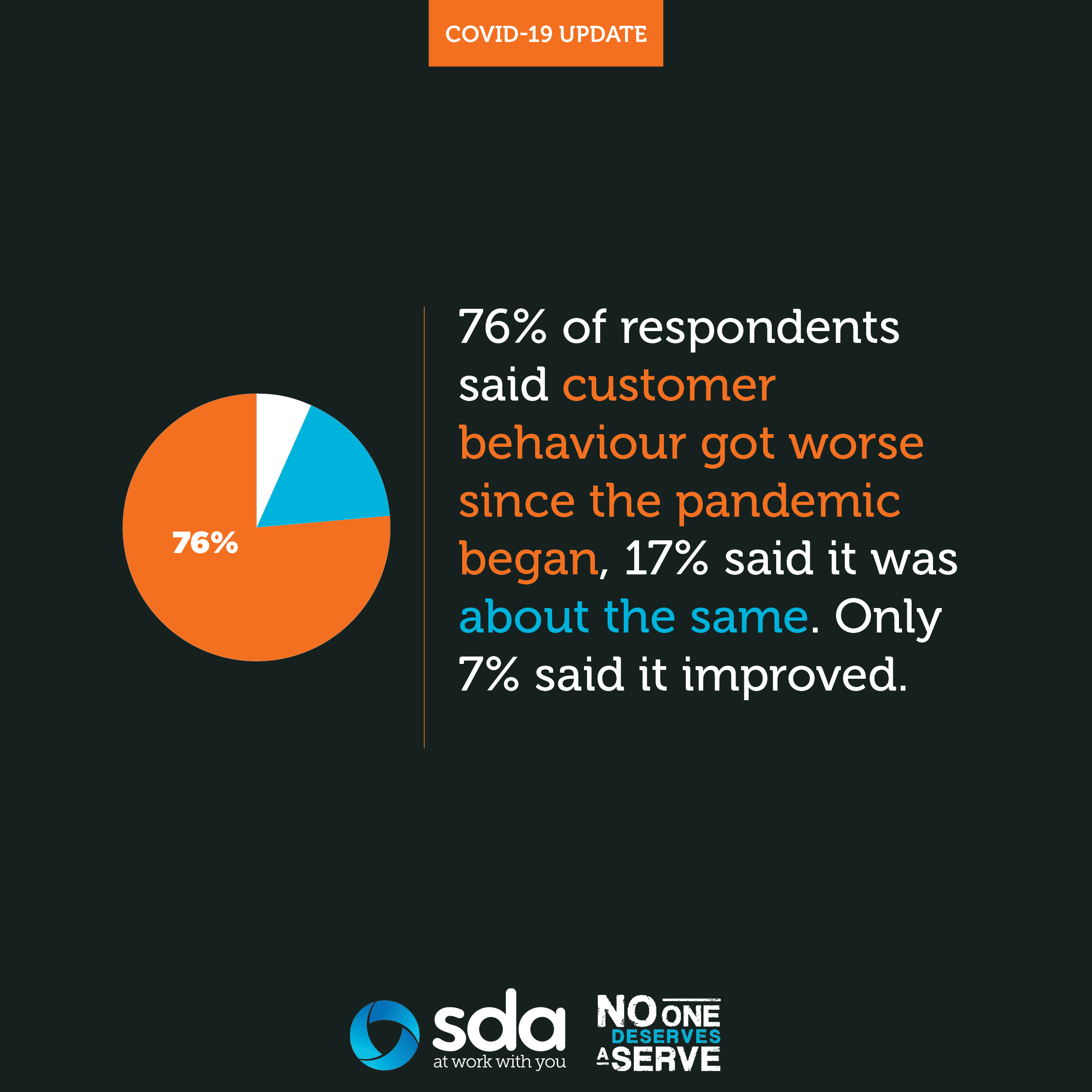 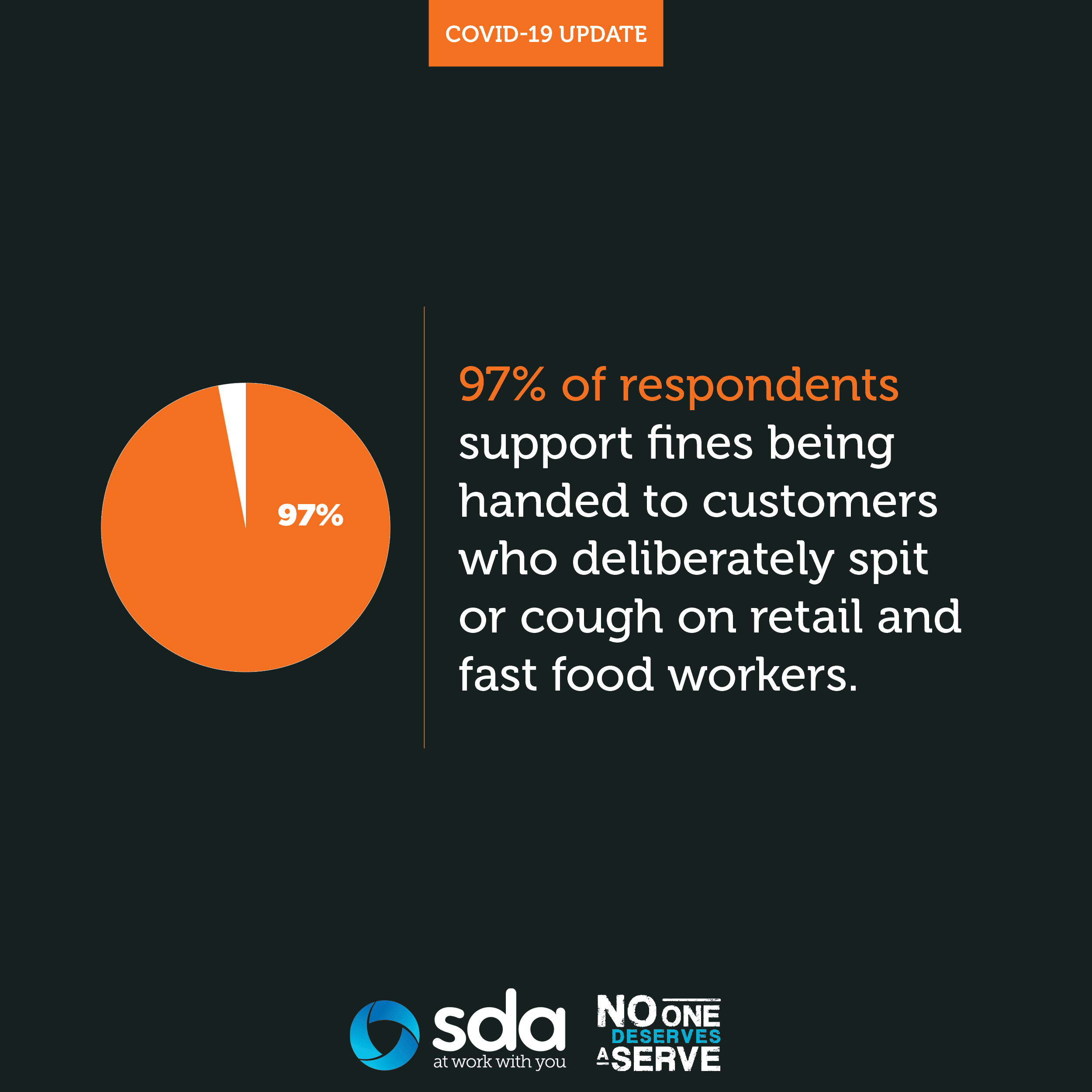 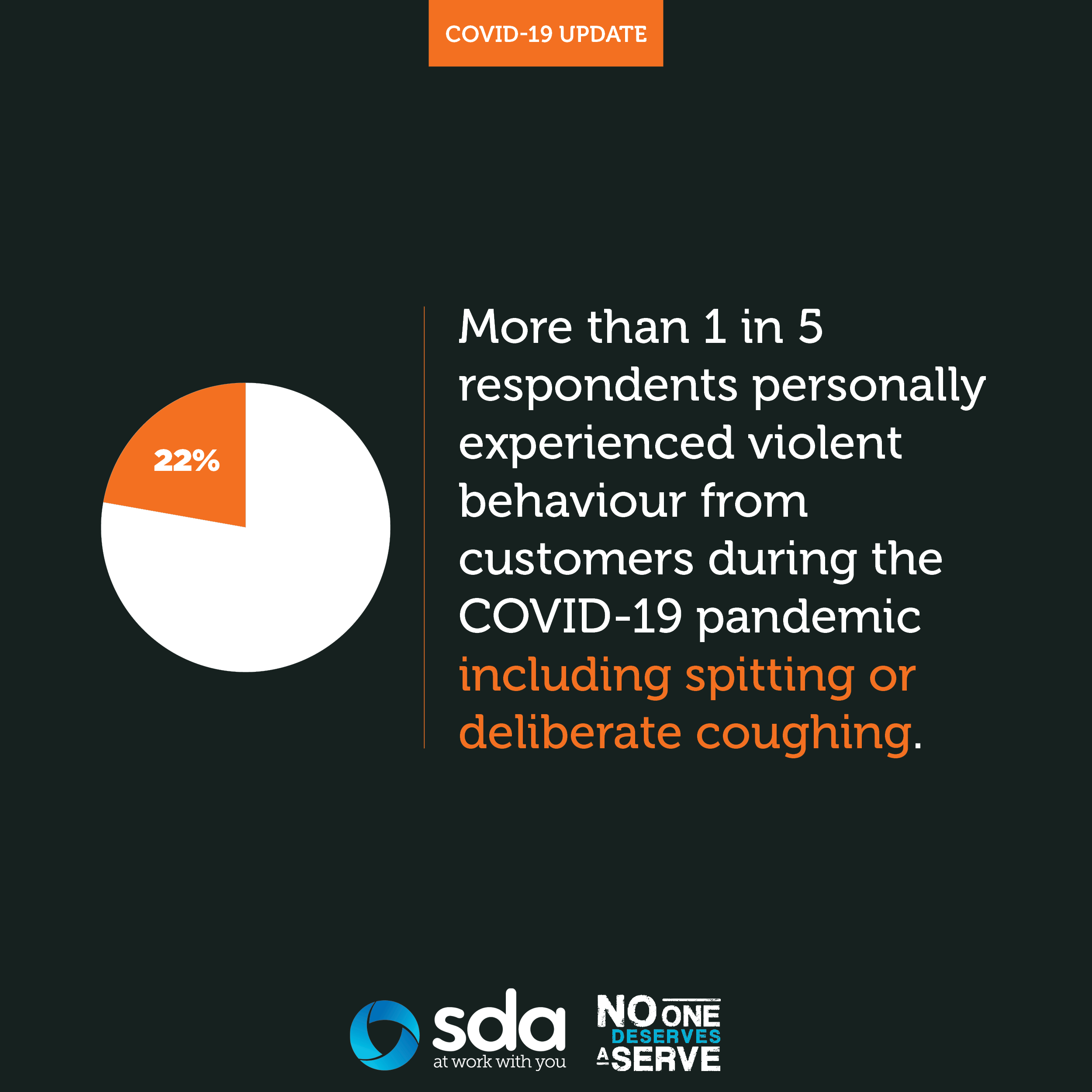 Presented below is a small selection from the many responses the SDA received describing incidents of violence, spitting, and deliberate coughing experienced or witnessed in stores.

“Coughing in my face spitting into hands and rubbing it all down the milk fridge handles and laughing why he was doing it. Absolutely disgusting.”

“My co-worker got spat on her face because she was Chinese.”

“Someone spat on me because there was no toilet paper.”

“A customer has spat at one of the managers, a co-worker was slapped in the face, and another co-worker was threatened to be beaten.”

“Lady was coughing throughout the store had to ask her to leave.”

“Customer got mad because he was caught stealing, so he spat on our fresh flowers.”

“A man said he had the virus and coughed towards staff.”

“Man stealing coughed and told me he had Covid as I stopped him from leaving.”

“Young guy wearing a mask intentionally coughed in my direction claiming he had Covid 19 because I was letting him know he had to pay for something.”

“Customer spitting on the money before handing it over.”

“A woman was walking around the store deliberately spitting on staff and customers, she was told to leave, and she came again the next day. I felt unsafe and at risk not knowing if she was contagious or not.”

“A younger woman was at the checkout and started a coughing “fit”, coughed at three/four staff in the vicinity. Mouth uncovered, this was late March, 2020.”

“Customer spat in his hand and put it on his items and on the cash that he handed me.”

“I had just finished cleaning self-service checkout and a man came behind me and coughed then laughed.”

“Customer came in and deliberately coughed all over the hot roast chickens, all chickens had to be removed and binned, staff were left to clean up!!!”

“Coughing, spitting, snatching, abuse, and filmed even after I vocalised not wanting to be filmed.”

“gentleman became angry because I asked him to step back from the customer in front of him. He said I was stupid and coughed in my face.”

“The customer became violent towards me and two other staff members. The customer resorted to sneezing on us all. That was before the plastic shields came up for us to use and protect the staff from this kind of bad customer.” 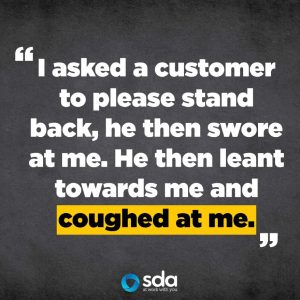 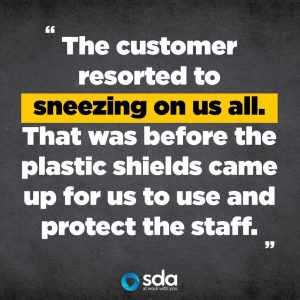