How will penalty rate cuts impact you?

Sunday penalty rates will be reduced again on 1 July 2019 in line with the Fair Work Commission’s decision.

For work on Sundays the cuts are made to the following Modern Awards in the retail, fast food and pharmacy industries:

If you are covered by an Enterprise Bargaining Agreement instead of a Modern Award, these reductions may also apply. It is important to check your Agreement to find out.

The SDA, the union for retail and fast food workers, opposed these cuts to penalty rates every step of the way.

This included appealing the decision in the Federal Court with the hospitality workers union, United Voice, but unfortunately the challenge was unsuccessful.

The SDA continues to campaign to protect penalty rates as fair compensation for working unsociable hours. 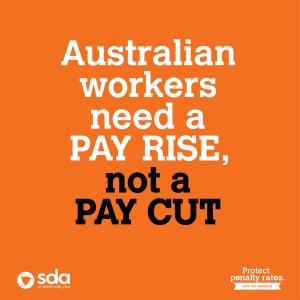