Australia’s economic performance – the envy of the world according to Scott Morrison – is proof positive that Australia’s lowest paid workers deserve a substantial pay rise as the Fair Work Commission concludes its Annual Wage Review.

That’s why the SDA has launched an advertising campaign in support of a ‘fair’ increase in the minimum wage on July 1.

Last year, the Fair Work Commission used what it claimed was the most authoritative economic data available – the RBA May statement of monetary policy – to justify a 7 month freeze in what was in any event a token pay rise.

Relying on this official data, which proved grievously pessimistic with the economy performing far better than forecast, inflicted a real wage cut on Australia’s lowest paid workers who had risked their health and safety to serve the community on the frontline throughout the worst of the pandemic.

For example, unemployment was predicted still to be at 9 percent last December; in fact it was just 6.6 percent – 2.4 percent stronger than forecast.

The RBA also predicted that growth would still be negative in December (minus 6 percent). In fact, the economy had returned to growth in the September quarter and reached 3.2 percent by the end of 2020.

If it was good enough for the Fair Work Commission to use that data to justify last year’s decision it has no option but to rely on Australia’s envious economic performance to award a fair and reasonable increase in the minimum wage this time round.

The Morrison government and the Commission cannot have it both ways – to employ dodgy data to force unjustified sacrifice on the lowest paid last year and now to Impose another real wage cut as the rest of the community benefits from Australia’s enviable economic performance. 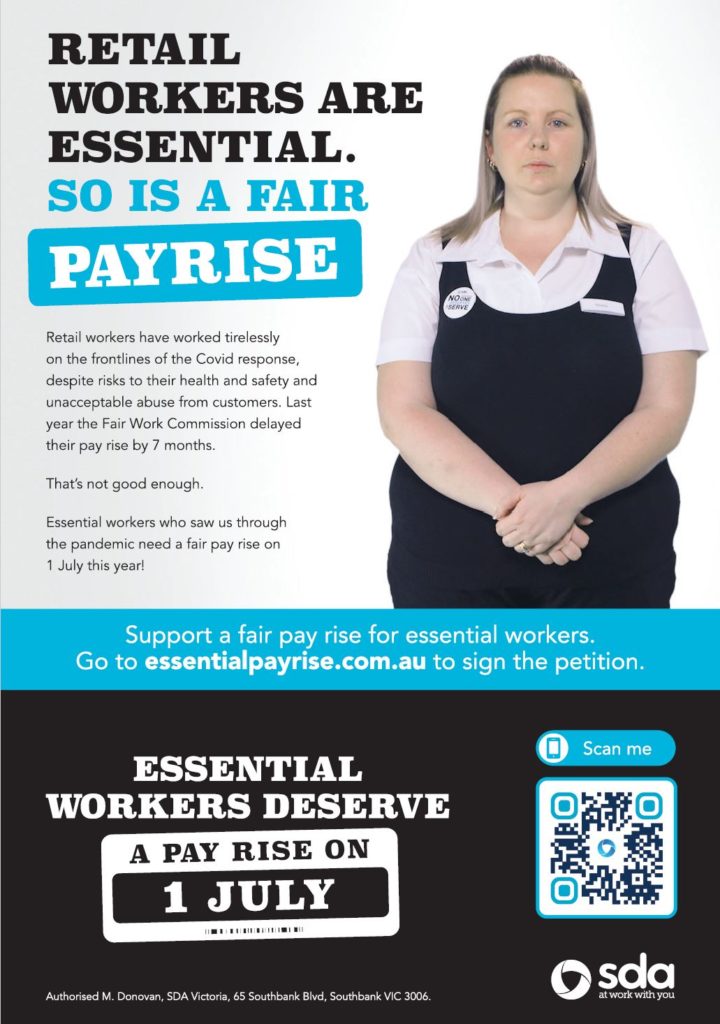 Support the campaign today, sign the petition at national.sda.com.au/essential-payrise.