From 1 October 2018 thousands of casual workers working in retail, fast food, hair and beauty and pharmacy will have access to a new casual conversion clause.

If you’re employed as a causal and covered by a Modern Award, you now have the right to request to convert to permanent work. Some companies covered by Awards include Domino’s, Spotlight, National Pharmacies and JB HiFi.

This significant improvement was won by unions in a case led by the Australian Council of Trade Unions (ACTU).

Why is this important?

Insecure work in Australia is on the rise.

Casual employment suits some people but not all – you shouldn’t be stuck in casual work if you’re working regular hours for over a year and want permanent work.

The new casual conversion clause in Modern Awards provides casual workers with an opportunity to access part-time or full-time work.

More than 2 million Australians are employed casually – many of those workers have worked regular hours over years and want the job security that permanent workers receive.

Casual workers receive a higher rate of pay through a casual loading but miss out on some entitlements such as annual leave or sick leave.

Not to mention, it’s important for workers in retail and fast food to be able to have a regular roster with set hours so they can plan their budget and life outside of work. 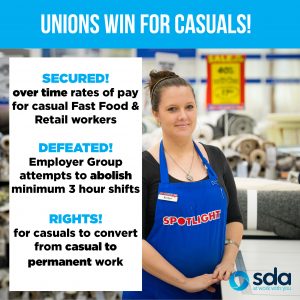 Casual workers who have been employed and working regular and systematic hours for 12 months can apply to request to convert to permanent work.

If you want to find out more about applying at your work, call your local SDA Branch.

How does this help SDA members?

Most SDA members are covered by an SDA-negotiated Agreement not a Modern Award.

However Modern Awards underpin Enterprise Bargaining Agreements, which means when we win an improvement to an Award it then flows on to new Agreements we negotiate.

The SDA has already successfully negotiated the new casual conversion clause into new Agreements at Coles Supermarkets, Priceline and Woolworths Supermarkets (if voted up and approved).

Being a member of the SDA helps our ongoing work to provide retail, fast food and warehouse workers stronger rights at work and better job security.

Not an SDA member? Join over 200,000 workers fighting for a fair go today.