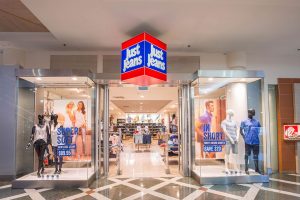 Following extensive negotiations between the SDA and Just Group the proposed Just Group Retail Agreement 2019 is ready for you to consider.

This page contains a summary of the differences between the proposed Agreement and the current Just Jeans Group Limited Retail Agreement 2009.

The proposed Agreement contains significant changes to conditions of employment at Just Group. Please read this information carefully and if you have any questions about the proposal please call the SDA on

The proposed Agreement ensures improved wage outcomes for all employees over the life of the Agreement, including:

Following a ballot of Just Group employees, a majority voted yes in favour of the proposed Just Group Agreement.

54% of eligible Just Group employees voted in the ballot with a 73% yes vote!

This is a fantastic outcome for Just Group employees as the Agreement will ensure:

The SDA worked hard throughout negotiations to ensure you receive fair pay and working conditions.

Thank you for voting to have your say and to protect and improve your pay and conditions at work.

The proposed Agreement provides for annual wage increases from the first full pay period on or after July 1 each year. Increases to these rates of pay will be based on the pay rise the SDA, with the ACTU, secures at the Fair Work Commission in the Annual Wage Review (AWR). The increase will apply to all classifications.

The rates of pay on commencement will be:

Casual penalty rates will increase over the life of the proposed Agreement for work on Monday to Friday 6pm to 11pm and on Saturdays. This is a result of the SDA winning our case in the Fair Work Commission for casual employees to receive penalty rates in addition to casual loading on weeknights and Saturdays.

The table below sets out how and when penalty rates and loadings will change over the life of the proposed Agreement: 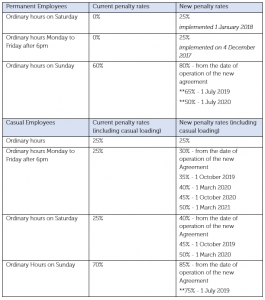 Public holiday penalty rates have been reduced to 125% for permanent employees in line with the FWC decision.

If time of ending of trading hours extends beyond these hours, the finishing time for ordinary hours will be 11pm.

Overtime is paid for all hours worked outside of the spread of ordinary hours.  The change is beneficial at the end of the day Monday to Saturday and at the beginning of the day on Sundays.

Rosters for full-time and part-time team members will be made on a 2 week or 4 week cycle. The roster period will not be more than 4 weeks.

Employees will not be able to work more than one shift on any day at the ordinary rate of pay.  If you do work an additional shift in one day you must be paid for the second shift at overtime rates.

A 12 hour break between ceasing a shift on one day and commencing a shift on the next is required or 10 hours by mutual agreement, instead of 10 hours in the current Agreement.  Roster changes for emergencies

Rosters can only be changed in the case of emergency with 48 hours notice.  Under the current Agreement it is 24 hours notice.

Attendance at shorter, 2 hour shifts for training, product nights, meetings and stocktake have been limited under the proposed Agreement to a maximum of 4 occasions per year.  Two weeks notice will be required, unless otherwise agreed, where possible they will be rostered before, during or after a shift and attendance will now be voluntary.

Removal of the 20% reduction in part-time hours.

The clause allowing Just Group to reduce a part-time employee’s core hours by 20% has been removed.

Regular pattern of work on commencement

When a part-time employee is first employed, a regular pattern of work will be agreed in writing.

A new provision is included in the proposed Agreement, following a successful case run by the ACTU and unions including the SDA in the FWC.  Casual employees who have worked a regular roster for more than 12 months are able to request to be converted to permanent.

The reference to casuals working 50 ordinary hours per week for the four weeks after the second Sunday in December has been removed.

The minimum period a team member can be offered a limited tenure has been reduced under the proposed Agreement from two weeks to one week.

Payment of wages on termination will now be paid within 7 days of the day the termination took effect rather than during the normal pay cycle.

The proposed Agreement no longer contains the provision for a day in lieu when your non-working day falls on a public holiday. The SDA fought hard to win this provision in the Award – which would have secured it for Just Group workers. However, the case was not successful and as a result of this we have not been able to retain this benefit in the proposed Agreement.

Family and domestic violence leave does not accumulate from year to year and is not paid out on termination of employment.

The annual leave loading of 17.5% or the weekend penalties an employee receives whichever is greater will be paid during a period of annual leave. Annual Leave Loading will also be paid on any Annual Leave owing on termination.

The proposed Agreement now specifies how Just Group can manage excessive leave accruals. Employees must have in excess of 8 weeks leave accrued, and must be given 8 weeks notice, and the taking of leave must not leave employees with less than 6 weeks accrued, or less by mutual agreement.

Under the proposed Agreement, personal leave will accrue progressively throughout the year. Under the current agreement team members are credited with 10 days on each anniversary year.

Employees may be required to provide appropriate documentary evidence (such as a medical certificate from a registered medical practitioner or a statutory declaration) on each occasion. Under the current Agreement, ill or injured employees are able to take 5 single days of personal leave per year without documentary evidence.

The amount of paid leave available to employees for the purpose of compassionate leave has been increased in the proposed Agreement. 4 days paid compassionate leave for permanent employees has now been extended upon the death of a parent-in-law, grandparent, grandchild, sibling, step-sibling or foster-sibling, which was 3 days under the current Agreement. It has also been extended from 1 day to 4 days upon the death of a grandparent-in-law, sibling-in-law, son-in-law or daughter-in-law.

The proposed Agreement provides for up to 2 days non-cumulative paid leave for permanent employees in the case of a yellow alert announcement for cyclones and floods and bushfires which pose a threat to property or create a need to care for children. Under the current Agreement Natural Disaster Leave is unpaid.

The proposed Agreement introduces defence forces leave. Permanent team members may take up to 2 weeks’ leave per calendar year to attend Defence Forces Reserve approved training camps. Team members who are required to attend full-time training during this leave will be paid an amount equal to the difference between the payment received in respect of their attendance at camp and the total amount for the ordinary hours of work that the team member would have received during that period.

The proposed Agreement introduces dedicated unpaid study leave. Team members may apply for study leave for up to 2 weeks per calendar year for the purpose of preparing for and participating in exams and assignments. Team members can take this leave as a continuous period or as single day absences.

If an employee has exhausted all paid leave options, they are able to take up to 90 days’ unpaid leave by agreement with Just Group. Under the current Agreement this was known as “unpaid leave”.

Career break leave is available in the following circumstances:

Under the current Agreement, availability of unpaid leave did not expressly require exhaustion of all other leave options.

The proposed Agreement introduces personal emergency leave. Team members can access up to 7.6 hours (pro rata for part time team members) of their accrued annual leave to attend to a pressing domestic emergency that requires their immediate attention. Relevant emergencies include a house fire, burst water pipes or burglary at the team member’s primary residence, and where the team member is required to attend to deal with emergency services or permit access by emergency personnel.

Personal emergency leave is not available if the team member can access emergency services leave or natural disaster leave.

Paid leave for the purpose of donating blood and bone marrow have been retained in the proposed Agreement.

The entitlements under the current Agreement for Jury Service Leave have been retained in the proposed Agreement.

Team members will be paid superannuation on all paid leave.

All allowances, except laundry allowance, will increase in line with wage increases.

The proposed Agreement introduces a new travel allowance for employees. Where Just Group requests an employee to use their own motor vehicle in performing their duties, the employee will be paid an allowance of $0.78 per kilometre.

The proposed Agreement introduces a new recall allowance. An employee who is recalled to work before or after completing their normal roster, or on a day which they did not work, will be paid at the appropriate rate for all hours worked with a minimum of 3 hours on each occasion.

Team members in the County of Yancowinna in New South Wales (Broken Hill) will be paid an hourly allowance of 94 cents, in addition to all other payments. This replaces previous location allowances. For team members employed prior to the commencement of the proposed Agreement, the location allowances in the current Agreement (in respect of Darwin, Alice Springs, Broome, Esperance, Karratha, Port Hedland and Kalgoorlie) will continue to apply.

Currently, employees are not required to wear a uniform. However, if a mandatory uniform is introduced during the term of the proposed Agreement, a special clothing allowance or reimbursement will be provided in accordance with the Award.

The proposed Agreement introduces a second meal allowance, where the overtime worked is more than 4 hours.

If a qualified employee is appointed by Just Group to perform first aid duties, they will be paid an additional allowance of $10.89 per week. Under the current Agreement, the first aid allowance is payable as a daily allowance for part-time and casual employees