The Power to Prevent Coalition is calling on the Australian Government to act now to prevent sexual harassment at work by implementing all remaining recommendations of the Respect@Work report.

In a formal submission to the Government’s consultation process which closed today, the Coalition has highlighted eight legislative reforms that can deliver on the Respect@Work plan for safe and gender-equal workplaces that are free from sexual harassment.

It includes the introduction of a positive duty on employers to stop sex discrimination and harassment before it happens, and new powers to be given to the Australian Human Rights Commission to investigate, monitor and enforce compliance.

The report also called for the Fair Work Act to be clarified to expressly prohibit sexual harassment as defined in the Sex Discrimination Act. The report also recommended that people who have been sexually harassed should be able to be supported by representative bodies to take legal action.

It also recommended that in situations where multiple people have been sexually harassed, that organisations be further empowered to make legal claims on their behalf.

Two years on from the Respect@Work report, we urge the Australian Government to address these remaining legislative reforms without further delay.

The Power to Prevent Coalition represents more than 60 diverse community organisations from around the country and across the health, family violence, business, union and legal sectors.

Every day, we see the impacts of sexual harassment and the failures of our systems to prevent it.

At least one in three Australians have been sexually harassed at work within the past five years.

Conducted by the Sex Discrimination Commissioner, the report also highlighted the gendered and intersectional nature of workplace sexual harassment, and the disproportionate impacts on women, Aboriginal and Torres Strait Islander women, women of colour, women living with disability, younger and older women, and women facing socioeconomic disadvantage, as well as LGBTIQ+ communities.

‘The Government has had nearly a decade to act to make workplaces and our community safer for women. They have had the Respect@Work report on their desk for two years. Still, working women are waiting for this Government to take the practical steps that will reduce harassment and violence in Australian workplaces.’

‘Women don’t need another committee or report or inquiry. The Government knows what it needs to do, and Australian women are sick of waiting.’

‘The Respect@Work report sets out clear and sensible legal reforms to empower workers to take action against incidents of sexual harassment and strengthen their rights – this is essential reform that two years on, remains unfinished.’

‘Creating a positive duty on employers to prevent sexual harassment is one of the key recommendations in the Respect@Work report. It is the employer who has the power to understand the problem, identify the sexual harassment risk factors and to create a safe workplace – not a 15-year-old working in their first job, a woman on a temporary visa or someone afraid of losing their job.’

‘Sexual harassment at work is pervasive, but it is preventable. With these important changes, we have the power to make safe, equitable and respectful workplaces a reality.’

‘The human resource frameworks around workplace sexual harassment have been failing employees for a long time. The recommendations of Respect@Work are sensible, workable and welcome.’

‘Aboriginal and Torres Strait Islander people are particularly vulnerable to sexual harassment at work given the larger racism and discrimination that exists both at work and in Australian society more generally, and the history of sexual violence that exists towards Indigenous women.’

‘Current legal protections against sexual harassment are failing our clients. We hear from young women leaving their professions, migrant women too scared to speak up, and older women facing unemployment and homelessness after enduring years of harassment at work.’

‘Sadly, very few of these women want to pursue the legal avenues currently available, disheartened by the heavy burden to obtain justice. The uncertainty, the emotional toll, the career damage, and the enormous financial risks are silencing women and allowing sexual harassment to remain prevalent.’

‘We are calling for sensible and practical improvements that will help prevent sexual harassment from occurring and reduce the heavy burden on victim-survivors. The women we represent need real change, not further reviews.’

‘Everyone should have the right to be safe at work, to work in a place which is respectful and free from sexual harassment. They should also have an expectation that if they are sexually harassed at work, that the laws will protect them and will hold the perpetrator and employer to account.’

‘It’s time for workplaces to take responsibility for their important role in providing a safe workplace and to be held accountable if they fail to do so. We also need laws which give the Australian Human Rights Commission powers to enforce the new duty, as well as powers to investigate systemic sex discrimination and sexual harassment, so the burden does not always fall to individual victim-survivors.’

‘The Respect@Work Report responded to the pain, fear and anger of women who have experienced sexual harassment in their workplaces – the clear expectation of all workers must be that their workplaces are safe, and this report exposed the terrible reality that this is not what has happened for so many.’

‘Respect@Work has raised the expectation for genuine change, and the response must be delivered comprehensively and with appropriate resources.’

Spokespeople are available for interview.

Everyone deserves to be safe at work and free from sexual harassment, but our current system is failing us. While sexual harassment is pervasive across all industries and all employment levels in Australia, it is not inevitable. We have the power to prevent it.

We call on the Australian Government to implement all remaining recommendations of the Respect@Work report in full and without further delay. This includes urgently amending our laws to create the following eight changes:

One of the core findings of Respect@Work was that our current laws are ‘simply no longer fit for purpose’ and should require employers to take proactive measures to prevent sexual harassment.

Respect@Work highlighted the disproportionate impacts of sexual harassment on women, in particular on Aboriginal and Torres Strait Islander women, women of colour, women with disability, younger women, older women, low paid and insecurely employed women, and on LGBTIQ+ communities. It found that we must address gender inequity as the main driver of sexual harassment.

Two years on, we are deeply concerned that key recommendations from Respect@Work have still not been implemented. These sensible and practical changes to our laws must be made urgently to help create gender-equal and inclusive workplaces that are safe, respectful and equitable for everyone.

The Power2Prevent Coalition is a group of more than 60 diverse community organisations, unions, academics, peak bodies, health professionals, lawyers and victim-survivors. We see the effects of sexual harassment on people around Australia every day and how our systems are not responding to the issues.

We stand together to call for this urgent reform to prevent sexual harassment at work. 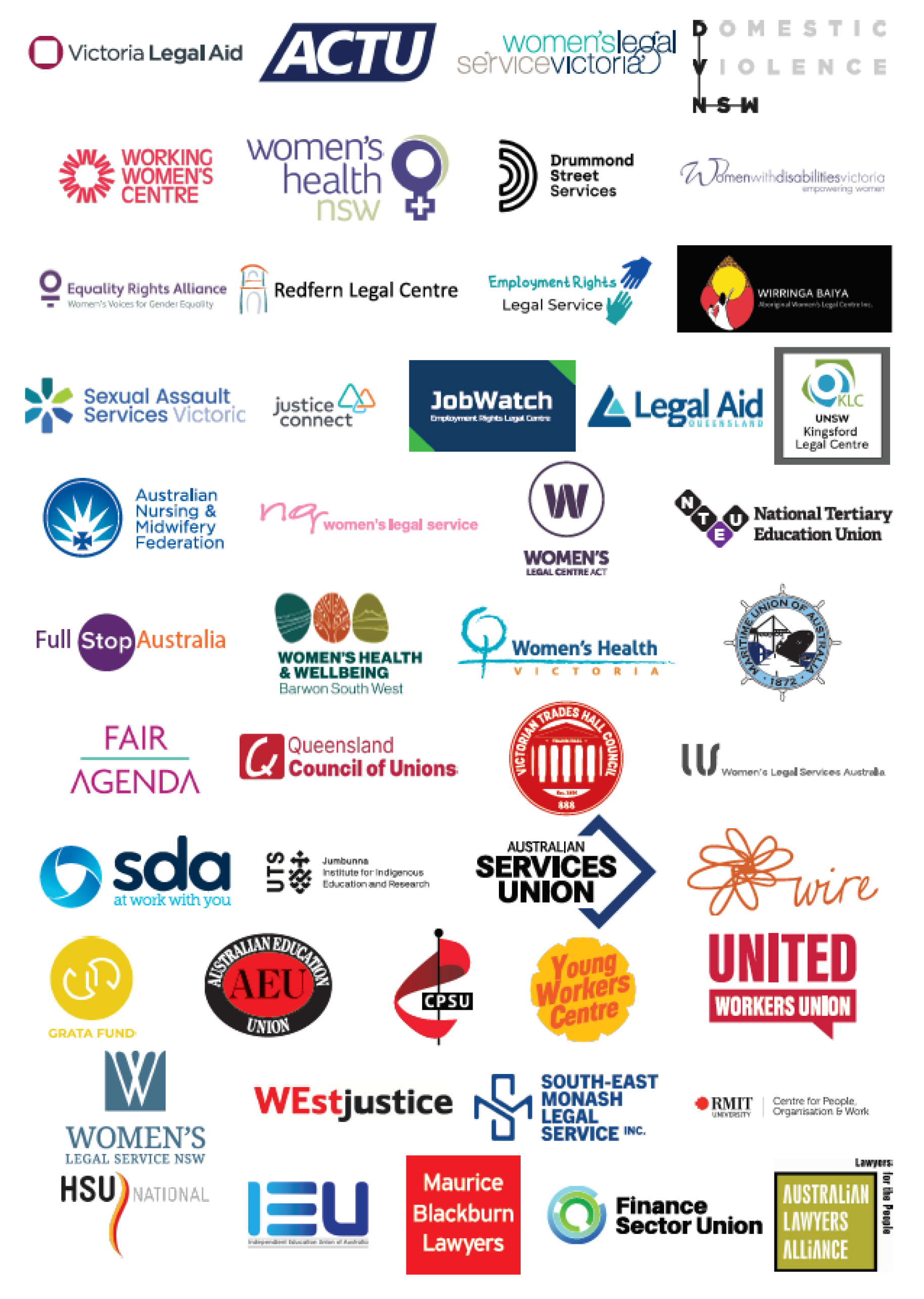