The SDA’s campaign to stop abusive and violent customer behaviour towards retail and fast food workers.

Working in fast food doesn’t put us below you. We’re just trying to do our job.
Watch our new fast food ad telling customers to respect workers.

In December 2017, the SDA launched the No One Deserves A Serve campaign to create awareness about retail and fast food workers facing constant abusive and violent behaviour from customers at work. This is a serious workplace health and safety issue that needs to be addressed.

From December, the SDA will ramp up the campaign in the lead up to Christmas where incidents of abuse and violence from customers may increase during peak trading periods in both fast food and retail.

In every state and territory in Australia, the SDA will run an advertising blitz on television, online, on radio, in newsfeeds and Snapchat, on buses and in shopping centres.

The message is clear: abuse is not part of the job, no one deserves a serve.

Please note, these are real stories from workers in their own own words and may contain offensive language.
Keep in mind, of the 1,000 workers we surveyed 41% were 17 years old or under and 71% were women. 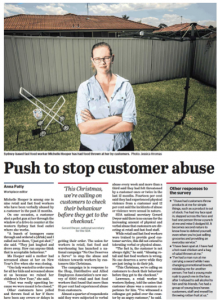 SDA union members are standing up against abusive and violent customer behaviour. Be part of the campaign.
Sharing your story is powerful and helps our case to build better, effective protections for workers.

Reporting is essential for a safer store

You have the right to a safe working environment

Everyone has the right to work in a safe environment. Abusive and violent customers are a safety hazard and should be dealt with appropriately.

The SDA calls on employers to do everything they can to prevent abuse and violence from customers and ensure workers are protected. Employers should:

Why should I report it - nothing will change even if I do?

Many retail and fast food workers think abuse is just part of the job. But this is wrong.

It is a serious health and safety issue that can impact your mental and physical health. Your employer has a duty to provide a safe working environment. Being abused at work is a safety issue – just like slipping on a spill or being burned with hot oil.

We need workers to report incidents so there is a record of it happening when we approach employers about putting in place better protections for you.

If there are no reports of abusive or violent customers, they could just turn around and say ‘no it doesn’t happen here’, which makes any change for a safer store more difficult.

How do I report abusive & violent customers?

The process for reporting health and safety issues such as abusive and violent customer behaviour may be different depending on your employer and your store.

Find out the correct procedure in your store and when an incident occurs report it to your supervisor.

Remember, you’re not alone. If you’re reporting incidents but don’t feel like you’re being appropriately supported, get in touch with the SDA for help.

Can I report it even if it doesn't happen to me?

Yes. You can report any safety issue or hazard that you see or experience, even if it doesn’t happen to you directly.

Reporting incidents creates a record of the abuse so we can push for better protections to make your store safer. If you don’t report it – it’s like it never happened.

Being on the receiving end or seeing abusive or violent behaviour is a safety hazard. It can have a serious impact on the mental and physical health of you and your work mates.

That’s why you should report it. For you and for your work mates.

I'm not coping with the abuse - where can I go for help?

Exposure to abusive behaviour from customers can impact on your mental health.

If you need immediate help, contact the following organisations for professional help. 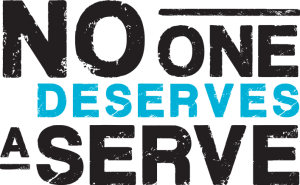 SDA members are campaigning to stop abusive and violent customer behaviour in every state and territory in Australia.

It’s an ongoing campaign targeting customers to change their behaviour and build better protections for workers.

Since December 2017, the SDA has been publicly campaigning to keep this issue in the spotlight.

1 in 5 Australians have noticed our campaign with 85% saying it raises an important issue and 9 in 10 Australians agree that it’s never acceptable to abuse workers.

We recognise that this is a long-term campaign and changing customer attitudes and behaviour and putting in place effective protections for workers won’t happen overnight.

In March 2018 the SDA held a national industry roundtable bringing together employers, employer groups and relevant government agencies on how to tackle the issue and better protect workers.

Following the roundtable, there has been important steps towards creating change including:

The SDA continues to call on customers to respect retail and fast food workers because abuse shouldn’t be in a day’s work.

We are also asking employers and employer groups to step up and do everything they can to prevent abuse and violence and ensure workers are protected.

Employers should encourage workers to report all incidents, support those workers when it happens and send a clear message to customers that abusive behaviour is not tolerated.

How can you support the campaign?

Imagine going to work every day knowing you will probably be abused? That’s the reality for thousands of Australian retail and fast food workers. It cannot continue and we need your support.

Everyone can help make a difference by showing respect to retail and fast food workers. When you’re shopping this Christmas or going through the drive-thru on your holidays remember – no one deserves a serve.

Abuse shouldn’t be in a day’s work.

Please share our videos with your friends, family and in your community to create awareness about this issue and call out customers who do the wrong thing.

Join the SDA, the union for retail and fast food workers

If you work in retail, fast food or warehousing joining your union the SDA is one of the best things you can do to help the campaign.

SDA members across Australia are driving this campaign and we need more support to tackle this issue.

Standing together is critical for safer stores and to put in place industry wide protections for workers.

The customer is not always right.
Abuse shouldn’t be in a day’s work.
Watch our ad.