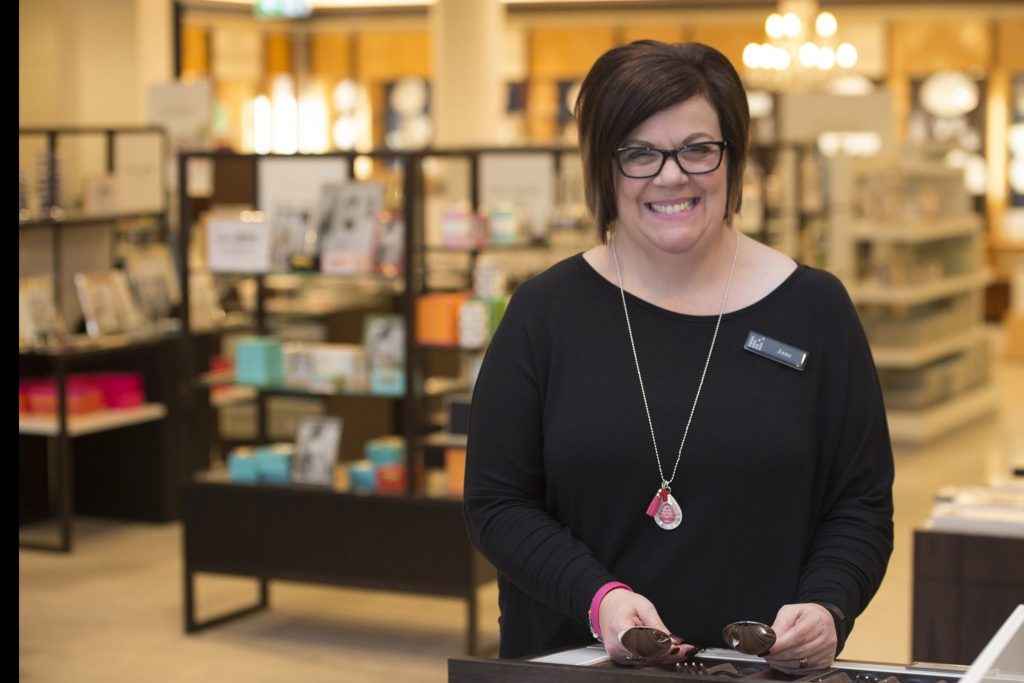 Good news! The new David Jones Agreement has been approved by the Fair Work Commission.

The new Agreement will take effect from 26 February 2019.

This is a fantastic outcome for employees at David Jones.

The new David Jones Agreement secures your pay and conditions over the next few years and includes pay rises in July each year.

Remember, employees will receive increased penalty rates under the new Agreement as follows:

Once the new Agreement comes into effect check your pay slip to make sure you are being paid correctly.

The SDA thanks union members for your support. Your union membership has helped to protect and improve your pay and conditions at David Jones.

The proposed Agreement provides for annual wage increases on July 1 each year. Increases to these rates of pay will be based on the pay rise the SDA, with the ACTU, secures at the Fair Work Commission in the Annual Wage Review (AWR).

The Level 1 rate will increase by the AWR increase and the higher levels are paid at a higher percentage of the Level 1 rate. The following rates of pay apply under the new David Jones Enterprise Agreement 2018. The Monday -Friday 6pm-11pm casual rates apply from a positive vote of employees. Other increases apply from the approval of the agreement by the Fair Work Commission 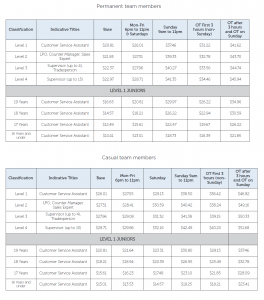 Penalty rates and casual loadings will increase under the new Agreement. Some of these increases have already been implemented as a result of ongoing negotiations, including an increase in the casual loading from 20% to 25% and the introduction of Saturday penalty rates.

Casual penalty rates will increase over the life of the Agreement for work on Monday to Friday 6pm to 11pm and on Saturdays. This is a result of the SDA winning our case in the Fair Work Commission for casual employees to receive penalty rates in addition to casual loading on weeknights and Saturdays.

The table below sets out how and when penalty rates and loadings will change over the life of this Agreement: 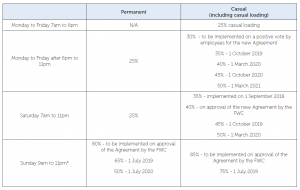 Overtime is paid for all hours worked outside of the spread of ordinary hours. Current savings arrangements for work on Monday to Friday and Saturday continue and has been extended to Sundays, so that employees will only be rostered to work after 6:00pm Saturday, after 7:00pm Sunday and after 9:30pm Monday to Friday on a voluntary basis unless employees accept positions where work after these times are part of the role.

The Classification Structure has been simplified and amended to better reflect the current roles employees are performing at David Jones. Some of the amendments include:

From 1 July 2019 the rates of pay for classifications will be paid the following percentage of the Level 1 rate:

Employees will not be able to work more than one shift on any day at the ordinary rate of pay. If you do work an additional shift in one day you must be paid for the second shift at overtime rates.

Change to the maximum shift length.

Change to break between shifts

A 12-hour break between ceasing a shift on one day and commencing a shift on the next is required unless an employee and David Jones agree to reduce the break to 10 hours.

Under the proposed Agreement permanent employees rostered to work 6 days in one week, may only be rostered a maximum of 4 days in the following or preceding week rather than the current 5 days.

Ready to work at start of shift

The proposed agreement contains a new clause that requires employees to be ready and able to fulfil the inherent tasks at the commencement of their shift.

Full-time employees will be provided a roster on not more than 19 days, unless there is agreement between the employee and David Jones to work 20 days. Currently in most stores full-time staff can be rostered for up to 20 days per 4 weeks.

Removal of the 20% cut in part-time hours clause

A new clause has been included which allows a part-time employee who has worked a regular pattern of additional hours on an ongoing basis over an anniversary year to request an increase
in their core hours. David Jones must genuinely consider a request and only refuse if there are reasonable business grounds.

Employees engaged on limited tenure period specifically for Christmas and Clearance will be provided with indicative rosters which will be finalised prior to commencement.

Attendance at shorter, 2 hour training shifts will now be voluntary for part-time employees under the Agreement.

The current provision of permanent employees being rostered a maximum of 3 Sundays in a 4 week cycle has been retained. In addition, the proposed Agreement makes it clear that where an employee agrees to work an alternative arrangement, they can terminate that agreement by giving 4 week’s notice to the Company. Current clause 7.4.5 referring to Company not obliging employees to work a core hour roster of more than 2 Saturdays and 2 Sundays in a four week cycle has been removed as it was
inconsistent. Existing savings provisions for Sunday work have been retained.

A new provision is included in the new
Agreement, following a successful case run by the ACTU and unions including the SDA in the FWC. Casual employees who have worked a regular roster for more than 12 months are able to request
to be converted to permanent.

Clearance and Christmas
The reference to casuals working 48 hours per week over Christmas and clearance periods has been removed.

The Agreement has been amended so that where a public holiday or bank holiday occur on a Monday, Tuesday or Wednesday wages will be paid no later than Thursday in that week.

A new provision has been included in the public holidays clause for work between 6pm and 7.30pm on Christmas Eve. David Jones will post a roster at least 14 days in advance for work between 6pm and 7.30pm. Employees will be given an opportunity to advise if they do not wish to work beyond 6pm and seek volunteer replacements. If there are insufficient volunteers, David Jones may direct employees to work after 6pm if it is their normal rostered shift.

The new proposed Agreement no longer contains the provision for a day in lieu when your nonworking day falls on a public holiday. The SDA fought hard to win this provision in the Award – which would have secured it for David Jones workers. However, the case was not successful and as a result of this we have not been able to retain this benefit in the proposed Agreement. 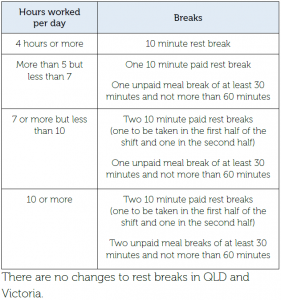 The proposed Agreement contains a new Family and Domestic Violence Leave clause. This will provide an entitlement for all employees, including casuals, to 5 days unpaid family and domestic violence leave each year for employees who are experiencing family and domestic violence and need to do something to deal with the impact of the violence. This was made possible by the SDA and ACTU case at the Fair Work Commission.

Peak trading: The periods of peak trade highlighted in the Annual Leave clause have been amended and the clause has been
changed so that requests made during peak trades are not unreasonably refused and considered on a case by case basis.

Direction to take Leave: For David Jones to direct an employee to take annual leave they must have in excess of 8 weeks leave accrued, (currently 4) and must be given 8 weeks notice, instead of 4 and must not be left with less than 6 weeks accrued.

This has been retained and now defined as per the DJs Personal Business Leave Policy i.e. the purpose for which it may be taken include taking delivery of furniture, signing legal papers and attending bank appointments.

To ensure compliance with the NES, the quantum of personal leave that accrues each year is reflected in days not hours i.e. 10 days
instead of 76 hours. The reference to accepting certificates from alternative medical practitioners has been removed.

The cap of a minimum of 1 week and a maximum of 6 months has been removed from the Agreement.

All allowances, except laundry allowance, will increase in line with any increase to the allowances contained in the Retail Award. The allowance paid to employees for travel to a store they transfer to during a refurbishment will be capped at 8 weeks. There is currently no cap.

A transport reimbursement clause has been introduced for employees working after 10pm or commencing before 7am whose regular form of transport is unavailable and they are unable to arrange alternative transport.

Accident make-up pay in Victoria will now only apply to existing employees in Victoria.

The allowances on commencement are as follows:

»» The Flexibility clause has been replaced with an Individual Flexibility Clause
»» Alternative rostering arrangements clause has been removed
»» The Hours Bank Clause has been deleted
»» Amendments to the Objectives clause
»» Definition of immediate family extended
»» Abandonment of employment – Company must make genuine attempts to contain an employee during the period of absence.
»» Inclusion of a Consultation clause when there is a major change
»» Flexible Pay Provision has been removed
»» Flexible Working Arrangements clause updated and expanded as per the National Employment Standards.
»» The Parental Leave entitlements have been maintained and simplified in Appendix D of the Agreement.

Many terms and conditions from your current Enterprise Agreement have been retained including:

The proposed Agreement protects many of the superior conditions won by
SDA union members including: 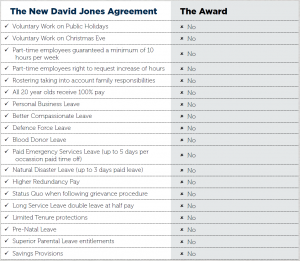 Level 1 means: – all employees not elsewhere defined and includes, employees engaged in performing duties aligned to sales, customer service, demonstrations, using mechanical equipment as required, stock handling, distribution and replenishment, employees engaged in the cooking, preparation or service
of food, collection of money and preparation of commodities for sale including but not limited to prepacking, weighing, pricing of fruit and/or vegetables on the shop premises. Indicative roles include (but are not limited to): Beauty Consultant, Sales Professional, Customer Service Assistant and Food & Beverage Assistant.

Level 2 means: – Employees who in addition to level 1 duties and skills, hold duties that require a specialist skill, such as fitting or tailoring, cooking, merchandising, trained fitters (children’s shoes and prosthesis). Their specialist skills enable them to provide enhanced customer service. Employees at this level, although
experienced, do not hold a trade qualification in the field in which they perform their duties. Indicative roles include (but are not limited to): Loss Prevention Officer, Counter Manager, Sales Expert (Specialist) and Stylist.

Level 3 means: – Employees who in addition to the duties on level 1 and 2:
• have a trade qualification, performing the majority of his or her duties at trade level.
• And/or appointed by David Jones to supervise of team of up to 4 employees, classified as level 1 and/or level 2. 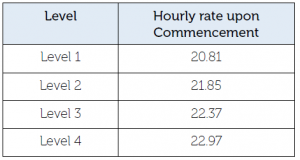 Voting will be done electronically which will be facilitated by CorpVote.

You will receive an email about the process with a unique identifier to be used for voting and instructions.

You will be able to vote online or by phone.

Make sure you have your say!

Remember, no new Agreement will be introduced without a majority yes vote of David Jones employees.