THE UNION FOR AMAZON WORKERS 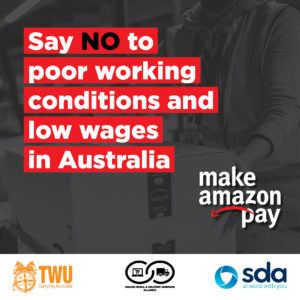 The SDA, the union for warehouse workers, represents Amazon workers in Australia.

The Australian union movement is proud to stand up for a fair go for workers because nothing is more important than a secure job with a decent wage.

The race to the bottom on wages and secure jobs is a global problem and Amazon is a prime example.

This week is a reminder that these workers who carried on working throughout the pandemic deserve respect and have a right to a safe workplace.

While profits soar for Amazon, workers are left with little or no pay rises, working unimaginable hours without breaks.

They’re forced to work in unsafe environments and are often too afraid to speak out or to join their union in fear of retaliation.

As the union for Amazon workers, the SDA has worked tirelessly to stop the Americanisation of wages and working conditions in Australia.

From the day Amazon opened their first warehouse in Australia, the SDA has worked to enforce and lift safety standards on sites.

The union has taken legal action to stand up for workers who have faced discrimination at work.

The SDA and the Transport Workers Union formed Online Retail & Delivery Workers Alliance to further efforts to ensure that workers are protected at every step of the supply chain.

A secure job with a fair wage does not have to be a thing of the past for Australian workers.

We will not stand by and allow for Australian working conditions to be undermined.

The SDA has joined with over 70 other worker organisations around the world to support the ‘Make Amazon Pay’ campaign being run by UNI Global on the 26th of November 2021.

For more information on the action being taken against Amazon and to support the international campaign click the button below: 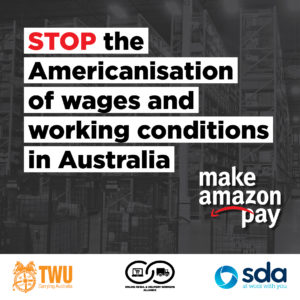 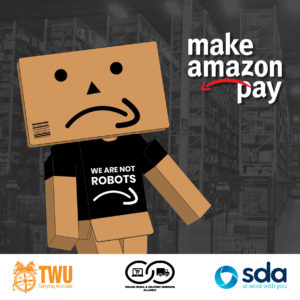 Not an SDA member?